We can proudly communicate with you today to inform you that as many obstacles as have been imposed by the established parties of all sides, as many doors as we have found closed in the various services, as much as our struggle to enroll our Athletic Club was fought, we did not stop trying and at this moment only some minor procedural steps remain for the final approval. The time we have been waiting with anxiety has finally come, the time you were asking us about every day. On the 23rd of July, 2018, we invite you all to the Founding Assembly of the “People’s Athletic Club OMONIA 1948”. All details concerning the Founding Assembly will be available in a new announcement.

Before we proceed with who we are, from where we come from and where we want to reach, we have to thank the people, who in this negative climate, have not been influenced and have continued their work in the various services, without prejudice in regards to the registration of our Athletic Club. Thanks to the members of the Pansolian Federation which have examined our application so far without any external influences. At this point, we also wish a quick recovery to the President of the Pansolian Federation who is facing a health issue.

The birth of the “People’s Athletic Club OMONIA 1948” is now a fact. Although birth in nature and in society is a joyous event, we cannot overlook that our own birth arose from a death. From the death of those we were taught since our childhood, from the death of principles and values, from the death of the things that as heritage, were passed from generation to generation of the Omonia supporters. That evening, on the 29th of May, for all of us that OMONIA served as an IDEA, there was no other choice but to move on to the birth of a new Athletic Club with the principles, ideals and ideology of 1948.

We are a new Athletic Club with very old roots, an Athletic Club that was founded by the needs of those that remained without a football club, a club whose football team will not have fans but the fans will have a football team. We are the “People’s Athletic Club OMONIA 1948” and we come to shake up the stagnant waters of the Cypriot society, so let’s analyze who we are.

A green Clover on a flag waving proudly, a banner flag lying between the wheat of the earth and the star in the sky. The wheat of the earth are to remind us of our class of origin, to remind us of the amateur football league (that takes place in the countryside communities in Cyprus) from which we will initiate, and the star in the sky to always show us the way, the path that carries our ideals and values, in order not to get lost.

Athletic to embrace all the ideals that sports have played since ancient times, such as fair play, solidarity, equality and all those lost in the modern times of the fixed games, the disoriented fans and the sellouts to the mafia and the millionaires.

PEOPLE’s because the base of its followers will decide on everything that matters to the Club through Transparency and Democracy, the fans will define which way to follow, but also how high the club will aim to reach. A Club from the People for the People, from you for me, with the sole owner its People. A Club that will prove that ownership by the People and Professionalism can successfully coexist.

OMONIA, a name with history for the Cypriot football, a name engraved in our hearts, the name of our mother, a mother who was born through a revolution until she was stolen from us. Our debt is to keep her alive, not only as a name but what it carries with it.

1948 a historic year in Cyprus, at which the anti-colonial struggle along with the Class-struggles were in sharp outburst, especially through the bi-communal strikes of the Miners. At the same time, the civil war in Greece directly affected sport clubs in Cyprus, which demanded from the athletes to sign the paper. Some of the athletes “when they were brought the paper, did not submit” and initiated the foundation of People’s Clubs across the island. Debt even heavier in the year 2018 not to submit and shout LONG LIVE 1948 and what it represents.

Let’s start brothers and sisters, although to be frank we do not start, we continue, with a clean forehead and tight punches. Let’s go back to color our Sundays, let’s go to find our dignity away from the big stadiums. Let’s build the future with our hands, let’s sing to the athletes who will have the honor to wear our first t-shirt, let’s go celebrate the first shake of the nets with our children and then tell them that this group belongs to them, to us and to all those who choose to stand by our club.

Let’s write history, so when they ask us which is our football team, to be able to answer OMONIA of the People. Because many teams have lots of people supporting them, but only we can proudly cry out that our team belongs to its People.

Finally if there are some people still wondering who we are, let’s make it even clearer.

It is us, your children, that some drove us away and should be ashamed.

It is us, who carry what we have been taught, even if they were forgotten from those who were teaching them.

It is us, who do not accept any sell-off with the excuse of modernization.

It is us, who believe that in football you can be romantic and at the same time successful.

It is us, who you made a bet we will fail, but we laugh at you.

It is us, the last romantics perhaps, which do not intend to change.

It is us who, in the dirty world we live in, will make transparency our flag.

It is us, which have as only fortune our clean hands.

It is us, which what we have built and what we will build will be with our hands and not by selling values and ideals.

It is us, who have no one behind our backs to support us but we are ready to give everything and as Tasos Livaditis wrote so nicely “It is us who have nothing and we come to take the world” 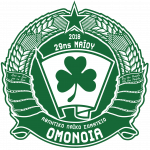